Toy Story has been my favorite movie forever and when Toy Story 4 came out we were all so excited to see it. We definitely weren’t disappointed. It was awesome! When my 6 year old daughter decided on a Toy Story party theme I was over the moon. I hope you love these DIY Toy Story Party Ideas that are easy and fun. 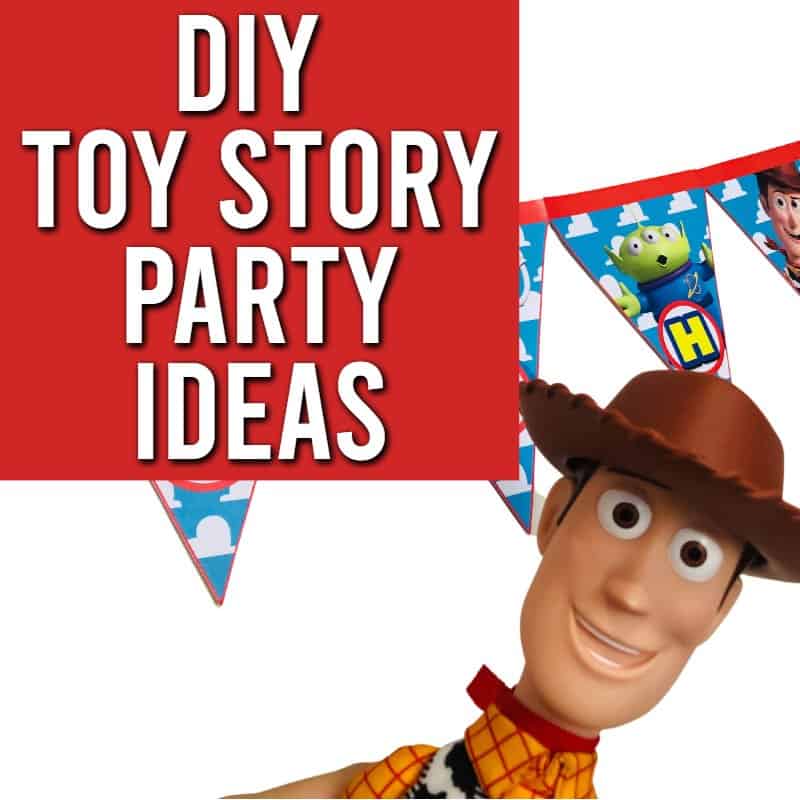 If you are planning a Toy Story Birthday party there is a HUGE range of Toy Story party supplies from party bags to Toy Story decorations and cake toppers right here.

There are some fantastic Toy Story cakes on Pinterest and Google. It’s amazing how talented people can be to come up with some spectacular Toy Story birthday cake ideas that look wonderful and are very much on theme.

If you don’t have the time to make a double tiered cake or if you are not skilled with fondant (puts hand up). I’ve got you covered. I use buttercream as it is easier to work with and quick. It also tastes great.

So I bring to you an easy Toy Story cake that you can easily make as well!

How to Make a Toy Story Cake Easy

Here is my picture of an easy DIY Toy Story Cake. It was super simple to make, and I was really happy with how it looked. I had never made a Kit Kat cake before and I was a bit nervous about how the ribbon would hold it up. However, with the icing it was no trouble at all. 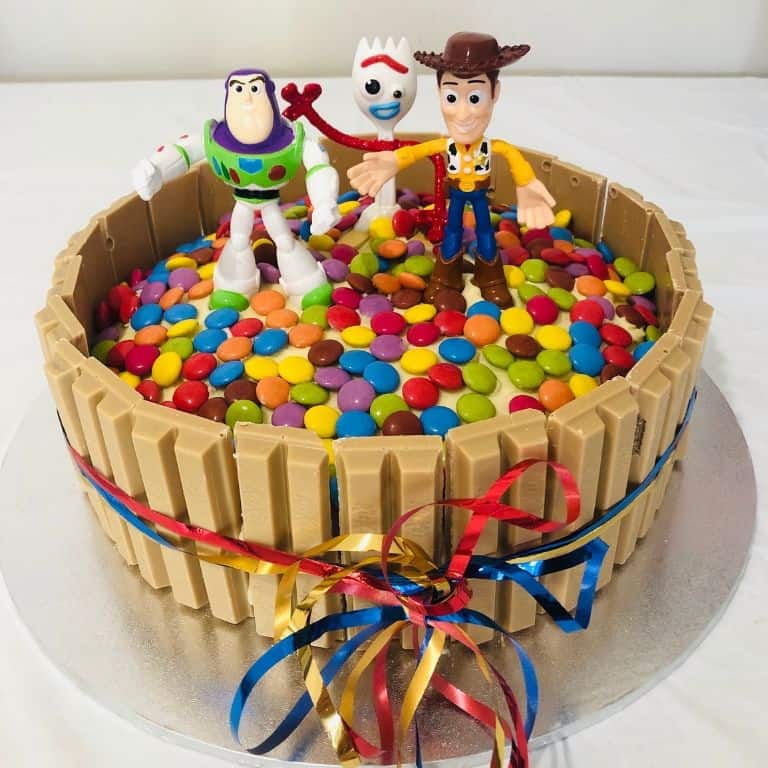 I simply baked a large round butter cake and iced it liberally with uncolored buttercream icing. I baked the cake the day before and stored it in the fridge for the night to save time.

You will definitely need a cool cake to get the icing and the chocolate bars to stick to it. I made the icing the day before as well, to save time on the morning of the party. With the icing I figured there was no need to add food coloring since the Kit Kats would hide whatever color it was.

The tricky part was cutting up the Kit Kats. It worked out easier to not cut them into singular sticks but rather the double sticks. I put them in the fridge beforehand so that they were a little firmer and less melty when they were being cut. They stuck well to the icing.

I then quickly added the Toy Story 4 figurines and pressed them down into the icing on the top of the cake, before the icing firmed up. The picture below is of the bendable Toy Story figures I used on the cake. They stand up by themselves as their feet are flat and you can bend their arms and legs so that they balance well on your cake.

Then I added heaps of Smarties to the icing. The more the better. As you can see, I also added blue, red and gold (yellow) curling ribbon and tied it in a bow around the cake. So that’s how you make a Toy Story cake easy.

Apart from the cake, you will need some other Toy Story food ideas for your party. I found some great Toy Story Party food labels that matched the party banner. (See decorations section below). 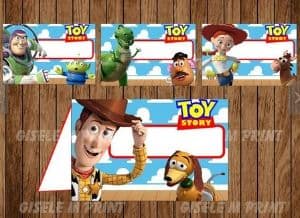 These Toy Story food labels were great because they were super easy. Just download, print, cut and fold. Then you can hand write on them the food ideas and you definitely get extra points for being creative on keeping to theme.

The best Toy Story food ideas I could come up with was:

The Hamm and Cheese Platter (cheese platter with ham and other deli meat),

…and my personal favorite is below. 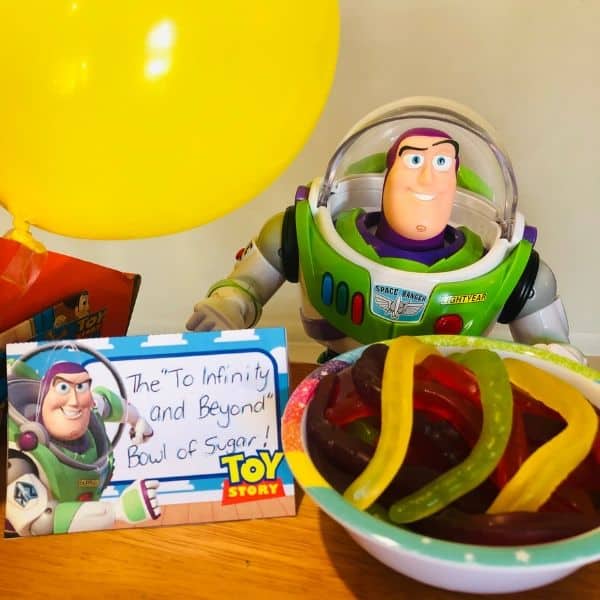 The “To Infinity and Beyond” (bowl of candy). No explanation needed. My kids didn’t think this was funny, but I promised them that the adults would understand the humor in that one. Extra points for being on a Buzz Lightyear food label.

These food labels are great as they feature all the awesome Toy Story 4 characters such as Buzz Lightyear and Woody, Rex, Bo Peep, Bullseye, Forky, Mr Potato Head, Jessie, Hamm and Slinky Dog. 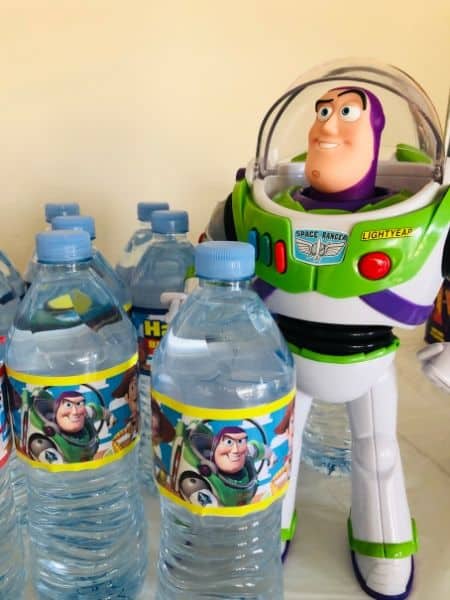 These Toy Story water bottle labels were really bright and colorful and were also easy to make.

Simply cut the old labels off your water bottles. Download and print these ones on normal 80gsm paper then cut them out. I then cut some self-adhesive contact paper into strips a little bigger than the labels (1 cm or 1/2 inch bigger on all sides of the rectangular label). I then stuck them on the water bottle.

The contact plastic is great as you can then put them in an icy cooler without worrying about the ink running on the label. 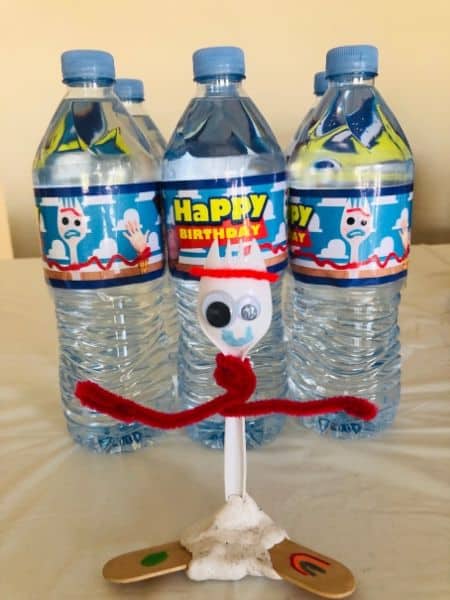 Since Toy Story 4 has only just come out to the movies, I thought I’d have to do a bit of searching to find decorations with the new characters on them as well. I found some great Toy Story Party Decorations to DIY with both the new and old favorite characters.

I tried to keep to the same color scheme as the Toy Story logo being blue, red and yellow. Another one of our favorite Toy Story decoration ideas that is also quick and easy is to hang bunches of balloons in the Toy Story colors hanging from the walls. I also used those colors in the ribbons on the cake.

Toy Story centerpieces are a fun way to decorate the party food table or present table. Here’s a fun Toy Story party centerpiece for a party table and what would be easier than using Toy Story toys in a box.

I just used a shoe box for this so that I could sticky tape some balloons to the back of it. I added lots of curling ribbon in blue, red and gold and stuck some Toy Story wrapping paper around the box as well. 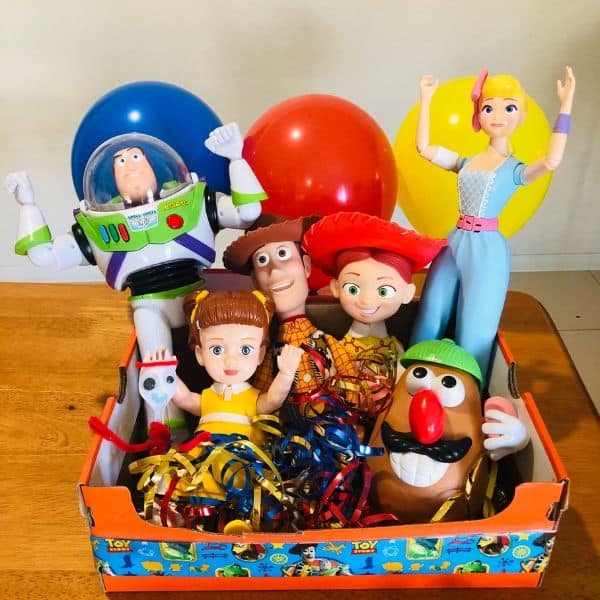 This Toy Story 4 Banner was great as it had all the popular characters (new and old) and really would suit both boys and girls’ parties. It was super easy to make. I just downloaded it here and then printed it on normal 80gsm printer paper and cut out the triangles.

I then used sticky tape to stick them to either string or curling ribbon. When hanging banners on the wall I would recommend using washi tape as it doesn’t take the paint off the wall when you remove the banner. 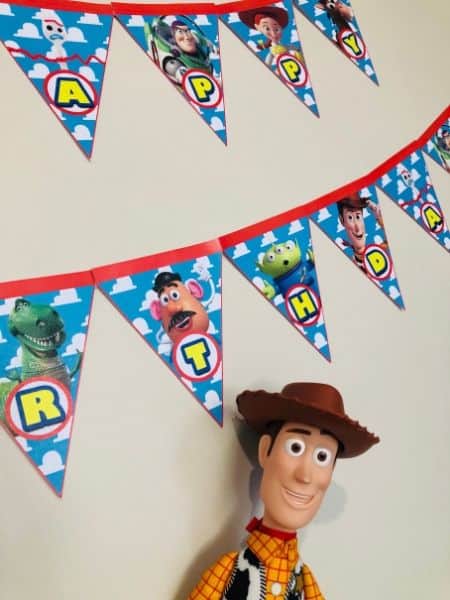 Here are some other awesome Toy Story 4 Table Decorations. These are definitely hot off the press as they have the new characters featured such as Forky and Bunny and Ducky. They would look great set amongst the food table.

I wanted some Toy Story 4 characters for my Toy Story party supplies for the food table. I found these awesome paper plates and cups that featured some of the new characters and of course our old favorites. 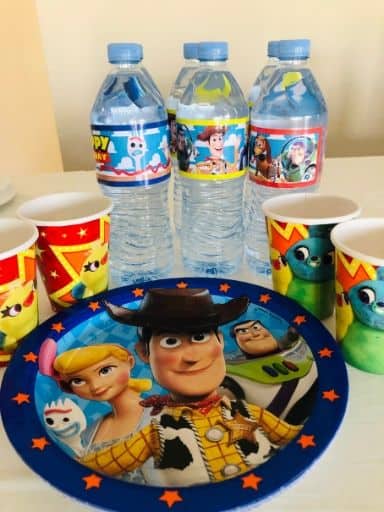 You can find the full set of party supplies here.

Whilst I still love old school party games such as Pass the Parcel and Musical Statues, I decided I needed some new Toy Story 4 games and activities to entertain the party guests. We decided to do a Mr Potato Head Relay, Pinata, and Forky crafting. 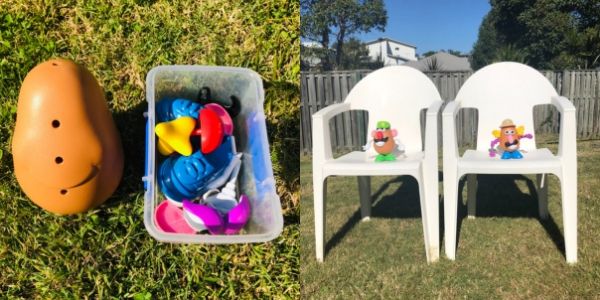 The Mr Potato Head relay game was super fun and enjoyed by kids of all ages ranging from 2 to 12!

I split the guests up into teams of 4 and had the Mr Potato Head heads (without their bits) sitting on a chair at the end of the backyard. Each team had a plastic box with Mr Potato heads bits: eyes, 2 ears, 2 arms, teeth, mustache, nose hat, and feet. Each team member had to take one piece at a time and run over to put the bit into the appropriate area then run back to tag the next team member to go. The team that had the Mr Potato Head finished first won!

A quick party hack: Let them play it again and this time have the team that has all the bits back in the box the quickest the winner. Easy pack up!

If the kids are a little older you might like to make the game a bit harder by putting all the bits in the one box for all teams and they have to sort through to work out what bits are needed.

I didn’t order a Toy Story pinata to arrive in time for my party so I had to improvise. I found a Dinosaur pinata so it became a Rex pinata and my daughter was thrilled. We even used it on the party table as one of our fun Toy Story birthday decorations before hanging it outside to play.

If you are after a more themed pinata check out this Buzz Lightyear pinata.

If you can’t get one shipped to you and you can’t find one another alternative is getting a pinata in the number of the age of the birthday boy or girl. 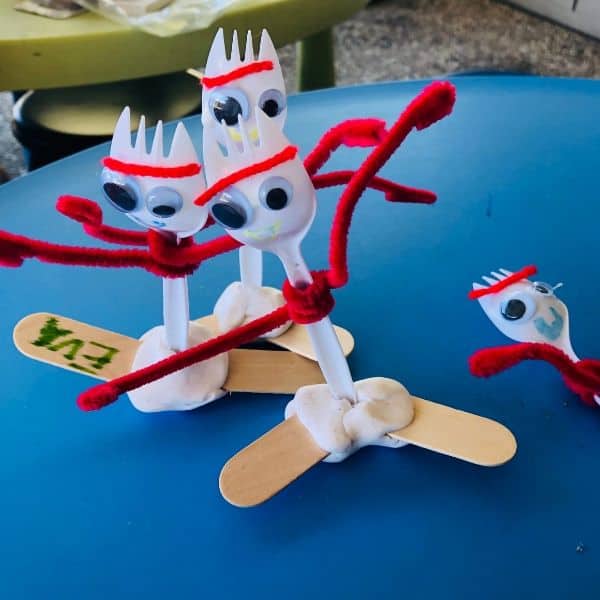 This Toy Story Forky craft was a great ice-breaker at the party for the kids that didn’t know each other. We laid out all the craft items on a mat and the kids made Forky by themselves without too much help.

Here’s how to make Forky from Toy Story. The items you’ll need are: 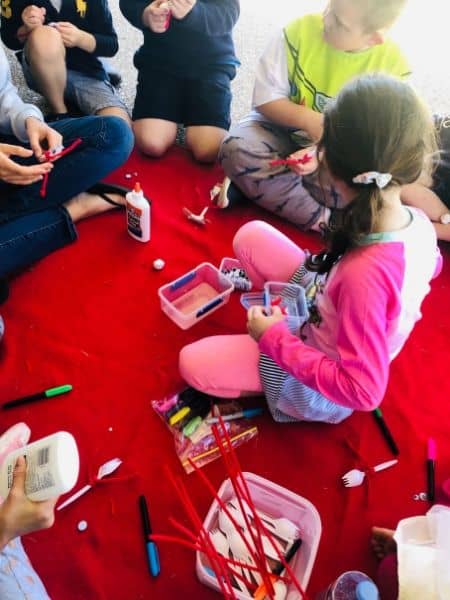 Once the kids had assembled their own Forky, we let them dry on a table. They were ready to take home by the end of the party. 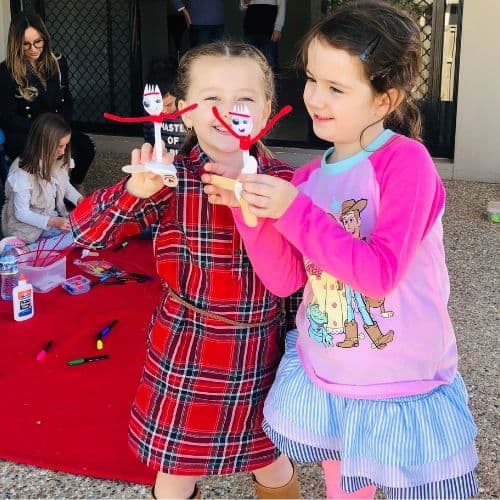 I always like to have a table set up with some crayons, textas and coloring in pages in the theme of the party. I printed some Toy Story coloring in for the party guests. You’ll find a large selection here.

I ended up getting these Toy Story knick knacks from the dollar store to put in the Toy Story party bags.

They were ok but if I was to do it again, I’d look at these next level Toy Story favors instead!

Or if you were after something a little more unique as a party favor why not an original Slinky toy to honor the Slinky dog character in the movie. A great alternative to lolly/candy in party bags and the kids would love them. This one below is for a set of 5 which is a cost-effective way to buy them.

I hope you enjoyed this DIY Toy Story 4 party ideas guide. It is super easy to do this party at home, and the kids all loved it. 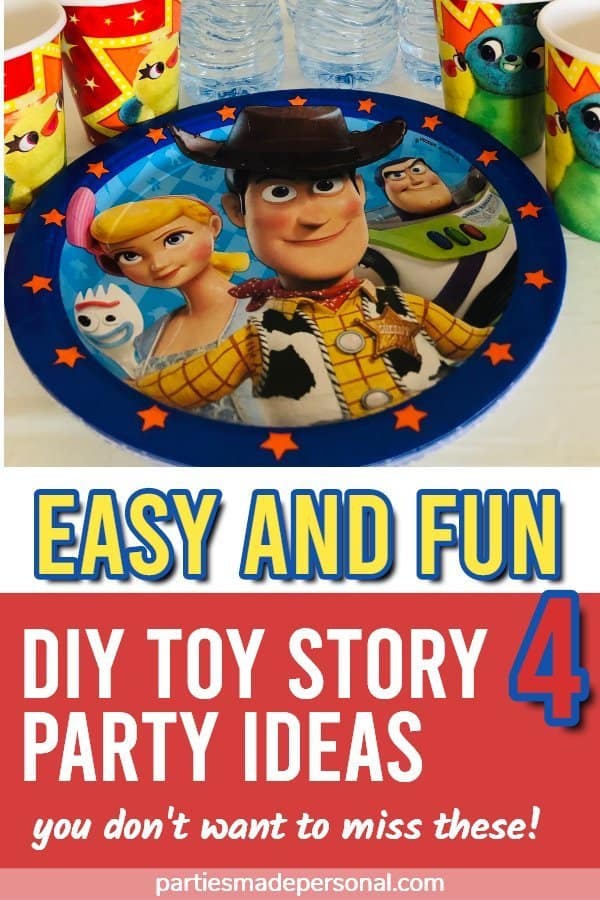 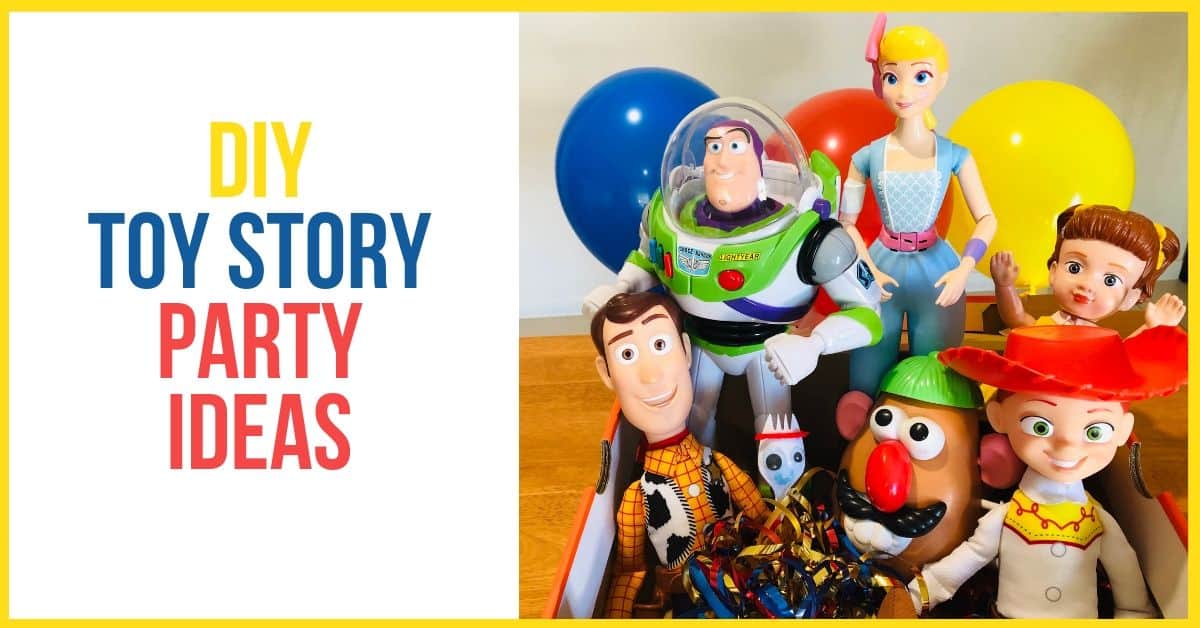