September is an awesome month to have a party. Read on for a comprehensive list of unique September party themes that will delight your party guests and be remembered fondly for years to come.

Themes for Parties in September

September marks the beginning of a new season and that in itself is a reason to celebrate. If you are in the Northern Hemisphere, September is the first month of Fall or Autumn. Fall is the start of some milder weather so it’s a great time to have an outdoor Fall themed party. It’s also the start of football season so another great reason to get friends together.

If you are in the Southern Hemisphere, September marks the end of winter and a Hello Spring party is definitely a great idea. As the days start to get longer again it’s a great time to entertain with friends and family. Spring is the season of new beginnings so let’s shed our winter skins and celebrate. 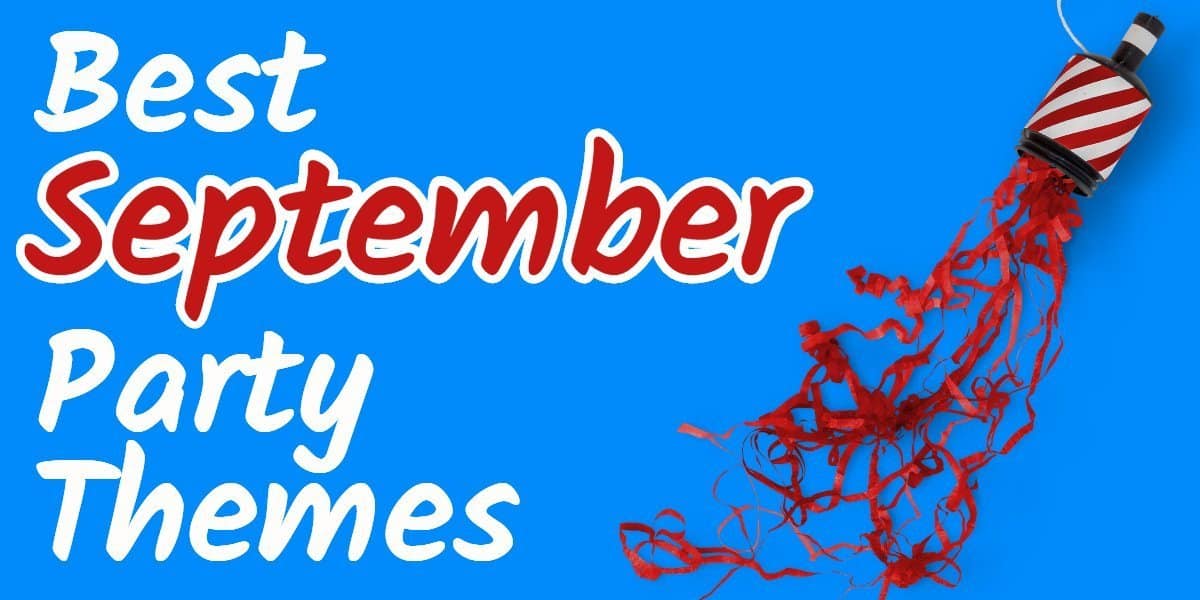 I hope you enjoy the detailed list of September theme ideas below.

Likewise if you’re looking for Libra themed birthday decorations check out this awesome set below to up level your party theme. 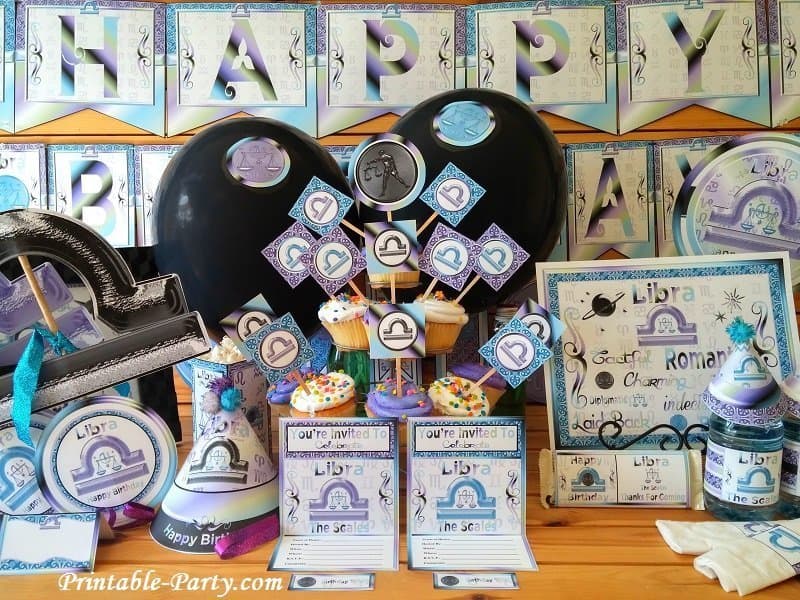 A favorite and fun party theme that would suit a September party is a Celebrity Dress Up party. The catch is that the famous person you dress up as must also have a September birthday. But to make it easier, if you choose an actor you can dress up as a character they played in a movie. Michael Keaton has a birthday in September so a Batman costume would work for this party theme. Tommy Lee Jones aka the Joker in Batman forever, or  Linda Hamilton aka Sarah Connor from the Terminator.

Thank you to timeandate and daysoftheyear there are a lot of interesting party theme ideas based on some fun, weird and wonderful International Days in September. Some are trivial but awesome, think Blueberry Popsicle Day (2 September) is fake? Nope it’s real. Read on for some September themed parties.

September celebrates some amazingly delicious food. If you ever needed an excuse to invite others over to indulge and have a Fast Food Party then here it is. September has Cheese Pizza Day (5th) Guacamole Day (16th), Cheeseburger Day (18th), Double Cheeseburger Day (15th), Pepperoni Pizza Day (20th), Chocolate Milkshake Day (12th), White Chocolate Day (22nd) and Ice cream cone day (22nd). It’s also Kids Take Over the Kitchen Day on 13 September. A great excuse to invite other families and friends over to indulge in their favorite foods and enjoy each other’s company. Here are some great decoration ideas for your fast food party theme.

You don’t need an excuse to throw a Pizza Party with friends, but in case you did since it’s both Cheese Pizza Day and Pepperoni Pizza Day in September here’s  your reason.

On the first Sunday in September families in Australia celebrate Father’s Day. A great day to celebrate the awesome fathers, grandfathers and male carers in the family. Even if you’re not located in Australia why not celebrate those awesome dads out there.

It’s a very family-centred month with Grandparents Day as well as Family Day in September. Another great reason for an inter-generational family party or gathering to celebrate extended family.

This year Friday the 13th falls in September. This date has many superstitions attached to it and it’s lucky for some unlucky for others. Why not plan a Superstitions party? Decorate your party with black cats, ladders, number 13, open umbrellas inside and anything else you can think of. Start searching for superstitions and see how many you can feature in your party. It would be a super fun way to get ready for the Halloween season and a really unique party theme.

In honor of wildlife day why not host a Safari party or a Zoo themed party featuring your favorite wildlife.

If you’re a Star Trek fan you’ll want to embrace this day and celebrate with a Star Trek themed party.

Why not plan a Teddy Bear’s Picnic Party to celebrate Teddy Bear’s Day. It would be super fun activity for younger children to get together outside with their favorite teddy and lots of fun picnic foods in a local park.

Since it’s Wienerschnitzel Day and Oktoberfest also starts in the last week of September so you could have an Oktoberfest party this month or next month.

Kids around the world rejoice…it’s Video Games day. Just remind them it’s day not week or year! Anyway why not have a gamer’s party to celebrate the favorite gamer in your life.

Play Dough Day is a great reason for a Play Dough Party. This is an awesome party theme for young children and the adults often join in on the play dough fun.

We really don’t EVER need an excuse for an awesome Mexican Fiesta party but here’s one if you needed it. Celebrate with margaritas, a fun Taco Bar, any type of amazing Mexican food and gorgeous bright Mexican decorations like these ones. 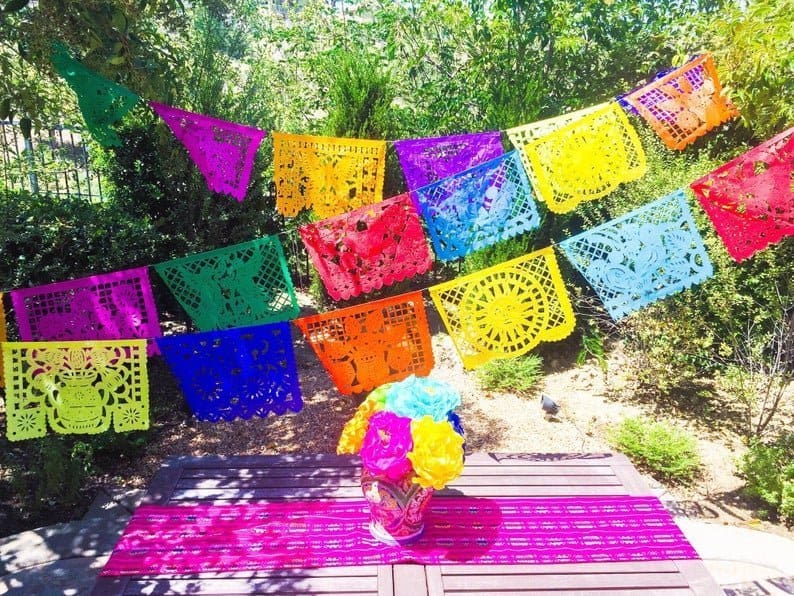 Pirate parties do not seem to go out of fashion ever! Talk like a pirate day is always a bit of fun and a great excuse to go all out Jack Sparrow on the nearest person and to have a Pirate party.

Have you heard of a Gratitude Party? I believe this is a trend that will catch on to celebrate and thank the amazing people who have been influential, helpful and have made your life better. Invite all of your nearest and dearest and tell them why they are important to you. You could have photos and messages decorating the party area honoring those who you are grateful to have in your life.

Time to have a Slumber Party for World Dream Day. These are a favorite party theme for tweens and older kids. If you are having a low-key party all you need is the space and lots of sleeping bags. Or to up-level your party you could  go all out with amazing glamping tents like these ones. 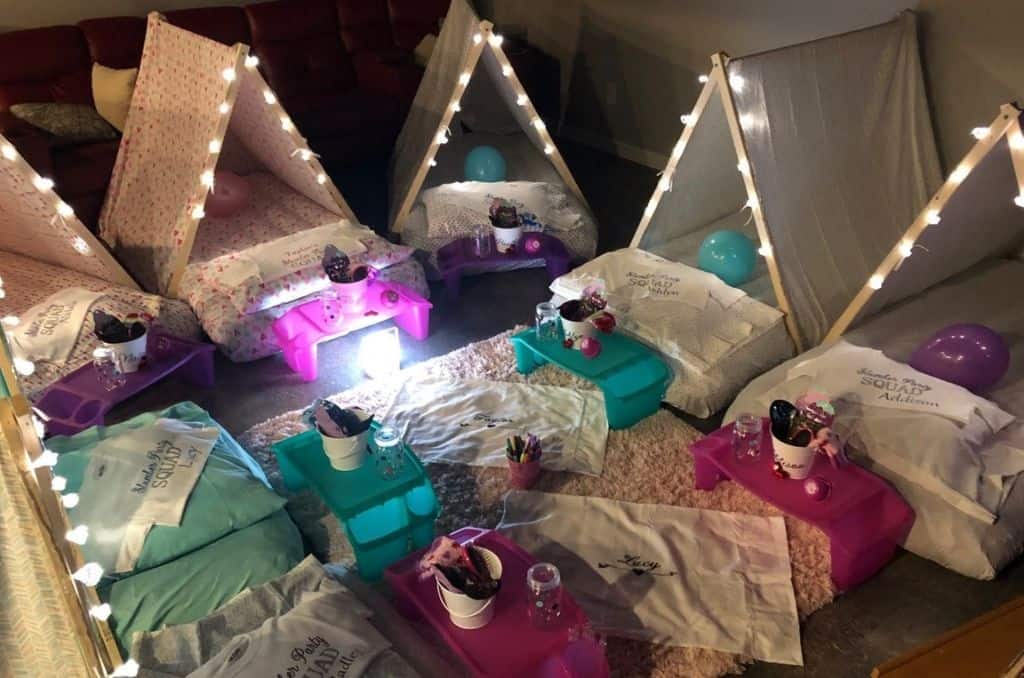 Okay so this is the perfect opportunity to dust off your old CD collection and look for those one hit wonders to play on Spotify at a One Hit Wonder Party. Extra points for people who dress up as their favorite one hit wonder artist and you’ve got the ticket for an awesome party. Need some ideas? Remember Right Said Fred? I’m Too Sexy”? I know you remember Vanilla Ice! How about Toni Basil and “Hey Mickey” – with the cheerleader outfits? Anyway whether you dress up or not the music will be sure to make the party rock. Here’s some music to add to your playlist – the best one hit wonder list.  You’re welcome!

If breakfast is the most important meal of the day why not celebrate it with a Breakfast party. The food will be super easy to make. Think eggs, bacon, toast, cereal, croissants, fresh fruit. If a breakfast party seems like too early a start for you turn it into a brunch party.

Okay last but definitely not least why not throw a Wife Appreciation Party, husbands? You’ll get extra points if it involves presents to your dearest!

I sincerely hope you enjoyed this list of unique party themes for a September party. 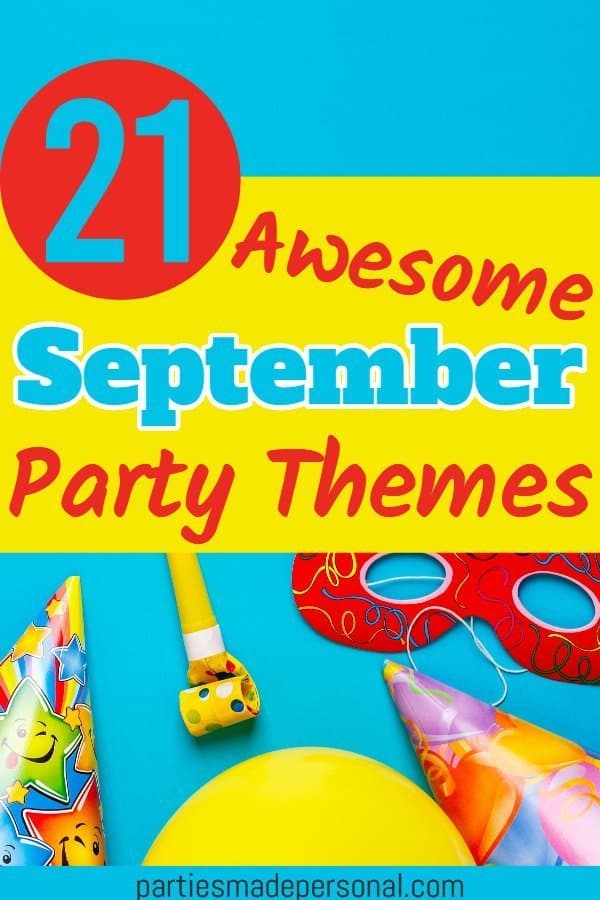